Ty Ehrman: I came to the industry from heavy equipment manufacturing, where I worked as an engineering manager. I joined Grant PUD 12 years ago and worked as an engineer, maintenance planner, supervisor, and plant manager before starting my current position as the managing director of power production. I run the power generation side of our business.

Ty Ehrman: Grant PUD is a customer-owned public utility district in north-central Washington State. We are essentially dependent on one water source: the Columbia River. We operate two Columbia River dams and two smaller hydro generators and deliver power to more than 50,000 customers over a sparsely populated 2,777‑square-mile area. We have about 740 employees, 280 of them on the power production side. We have a generation capacity of 2,153.6 megawatts, with an 850‑megawatt retail power delivery system peak load.

Hydro Leader: What other similar facilities are above and below you on the Columbia River?

Ty Ehrman: We’re the third PUD on the mid-Columbia. There are three dams above us that are also run by PUDs. Above that are Chief Joseph Dam, which is owned by the U.S. Army Corps of Engineers, and Grand Coulee Dam, which is owned by the Bureau of Reclamation. A lot of our water supply depends on what is released through Grand Coulee Dam. Downstream of us on the lower Columbia are four more Army Corps dams: McNary, John Day, The Dalles, and Bonneville.

Hydro Leader: Do you have agreements with those entities to ensure that you get the flows you need and that you pass along what downstream users need?

Ty Ehrman: There used to be an arrangement called the Mid-Columbia Hourly Coordinating Agreement that involved sharing certain information on what was going to be released and on flow requirements. Just downstream of us is the Hanford Reach, the longest free-flowing stretch of the Columbia River. Flow requirements in the Hanford Reach vary throughout the year and are critical during the fall chinook spawning and rearing seasons. That coordinating agreement lapsed several years ago and has not been replaced. For the most part, we get what we need to serve the flow requirements on the environmental side, but it has gotten closer and dicier at times than it used to be.

Ty Ehrman: It is primarily because there is no agreement in place. Drought and water supply have not been an issue for us. We get almost all our water from the Canadian Rockies, and we have not seen significant changes in supply.

Ty Ehrman: Hydro makes up nearly the entirety of our power generation. We also have a share of the Nine Canyon Wind Project to meet state regulations for renewable shares, but it’s a relatively small share.

Hydro Leader: Does that imply that the state does not consider hydropower renewable?

Ty Ehrman: Yes. Under the Washington Energy Independence Act (I-937), existing hydro does not qualify as renewable, although incremental hydropower and efficiency gains do.

Hydro Leader: Have you been dealing with any supply chain disruptions?

Ty Ehrman: Supply disruptions have affected our capital projects and our operations and maintenance work. We have had issues getting operational components, piping, switchgear, and all kinds of construction materials. Our procurement staff and engineers have had to work a lot harder to find what we need. We’ve had to make adjustments to schedules because wait times have frequently been long. It seems that everything we need that is dependent on petroleum is still coming in, but at a higher price and longer lead time.

Hydro Leader: Have those disruptions led to costs being passed on to your customers, or are you able to absorb them through your operating budget?

Ty Ehrman: We have a buffer for the time being, but if costs keep going up, our board will have to make some difficult decisions that might include rate increases for our power customers.

Hydro Leader: Have you had to cancel or delay any projects because of these supply chain issues?

Ty Ehrman: For the most part, we’ve been able to weather these issues, at least for the large projects that have consequences for us. For the smaller stuff, it has definitely had an effect. Right now, we’re working on a project focused on replacing station service and substation switchgear, and we’ve had to delay portions of that work. Delays can create further uncertainty about costs. For example, we’ve had to delay an ongoing capital project at Priest Rapids Dam to rebuild part of the embankment. We bid it at $37 million. We had 2 years of permitting delays, and by the time we resolved those delays, the cost had increased dramatically. The contractor got a $14 million adjustment—an increase of approximately 40 percent. That’s all due to increases in the cost of construction materials and labor. It’s pretty painful in some cases.

Hydro Leader: Do contractors communicate with you as these things play out?

Ty Ehrman: Yes, absolutely. One thing that happens is that we will get quotes that are only good for 10 days. Ninety days doesn’t happen anymore. It seems like everybody is nervous about increases in commodity costs.

Hydro Leader: How has the PUD responded to these issues?

Ty Ehrman: For the most part, we haven’t canceled projects because of price increases. We have twice had to delay a hatchery project because the lead times required to get components made potential bidders shy away. They looked at the schedule and lead times for parts and decided the risk was too great.

Hydro Leader: Do you have any sense of how long these disruptions might continue?

Ty Ehrman: I don’t think that things are going to come back down to the prepandemic level anytime soon. I anticipate that we’re going to be dealing with some of these things for at least another year, possibly 2 or 3.

Hydro Leader: Have you been dealing with a lot of staff turnover?

Ty Ehrman: We’ve been pretty fortunate. We have a good culture here. We’ve also made some adjustments to the way that we structure hybrid work. We have more flexibility for job classifications that allow for remote work, and that’s helped us with retention. During the pandemic, we even hired some people who work out of state, which is unusual for a publicly owned utility. We are seeing a change in attitude when we try to hire new people. When potential hires ask about working from home, and we explain that our policy requires a minimum of 2 days a week on site, they often decide to go work for a company that allows them to work from home full time.

Hydro Leader: What percentage of your workforce has to work on site because of the nature of their jobs?

Hydro Leader: What does the future look like for Grant PUD?

Ty Ehrman: We will run out of generation capacity to serve our load in about 7 years, so we are exploring how we can increase our generation. Our hydro resources are limited because our dams are run of river and don’t have significant storage capabilities. Our highest peak loads are during the winter and summer, and we get most of our water in the spring. That is one of the limitations of run-of-the-river hydro facilities like ours. All this means we will have to look at other generation options to serve our increasing load. We are exploring with two companies, X-energy and Nuscale, to look at promising technologies such as small, modular nuclear reactors, among other options. If it comes to fruition, we’ll have additional generation, which is exciting.

Large industrial customers are moving to our area, attracted in part by our low rates. We have some of the lowest rates in the nation. That creates a lot of benefits. Electricity-intensive facilities benefit the rest of our customers because they increase our revenue, allowing us to keep rates low for all our customers. We have a significant backlog of large industrial customers who are still interested in establishing facilities here, and the expectation of those future loads drives our capital investment on the transmission and distribution side.

Ty Ehrman is the managing director of power production at Grant PUD. For more information about Grant PUD, contact publicaffairs@gcpud.org. 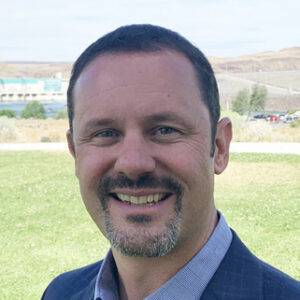